Toni Gonzalez was born in Tortosa (Catalonia - Spain) in 1956 and educated in Barcelona as an Industrial Engineering and Actor.

Toni Gonzalez is an arts consultant for the strategic development and transformation, the mobility and the internationalisation of performing arts and music projects based in Barcelona, Toni Gonzalez also works under the brand name "International Scene". Prepares and supports arts organisations in their internationalisation. Designs and curates projects for the exchange of knowledge of the cultural and artistic practices. Analyses and investigates cultural policies and good practices in the field of internationalisation, arts management and the performing arts and music sectors. He inexhaustibly communicate the results of his experiences by lectures, articles and publications.

Toni Gonzalez is member of the board of IETM (Informal European Theatre Meeting), and accredited consultant on internationalisation by ICEX-Next and IVACE (Instituto Valenciano de Competitividad Empresarial). He has been expert for assessment of proposals of the EU “Creative Europe” programme, vice-president of the “Asociación de Profesionales de la Gestión Cultural de Catalunya” (cultural managers Catalan association), co-founder and vice-president of the international network of performing arts markets “EurAm Bourse” and cofounder of Comedia Network, for the promotion and dissemination of culturally diverse performing arts make in Europe.

Previously Toni Gonzalez was artistic director of the festival “Barcelona Street Arts” within the fiestas de La Mercè de Barcelona (from 1998 to 2003), artistic director of the Three Wise Kings Parade of Barcelona (2002 and 2003), project coordinator of NAUMON by la Fura dels Baus (2003-2004) and, for eight years, he had different roles at Feria de Teatro de Tàrrega (from 1991 to 1998) promoting it as a performing arts international meeting point and market.

He also research international cultural policies and advise on best practice in managing arts projects and cultural institutions (most of his research and reports can be downloaded here). Recent studies include: “Mapping Resources for Performing Arts Internationalization – MARI”, for “FAETEDA – Spanish Performing Arts Federation” (2013); “Impact of Catalonian popular festivals” (2012), “Strategic plan for Basque Country performing arts internationalization” (2010), “Theatres in London, Berlin and the Netherlands” (3 handbooks, 2007, 2008, 2009), “Assessment of the dance sector in Catalonia” (2007 and 2009), “The Political and Legal Context of Private Support to the Culture in Canada and Quebec” (2007), “The Arts Councils in Europe” (4 reports: England, Scotland, Finland and the Netherlands - 2008), “The National Trust in England” (2006), “Practices and Models of Support to Contemporary Performing Arts in Europe” (2005), etc.

He lectures, teaches and writes extensively on arts management, arts internationalisation and cultural policies at major cultural events and in professional media. He has done this in Europe and Latin America in English, Spanish and Catalan. He regularly writes articles in “Entreacte”, the magazine of Catalan actors Equity and his blog  “Cultura es Política” has had a considerable impact on the performing arts community in Spain and Latin America.

Prior to that he was for eight years, actors’ teacher in the “Estudio Nancy Tuñón” de Barcelona and worked as an industrial engineer expert in energy efficiency new technologies for “Catalan Institute of Energy”.

BUILDING THE ARTISTIC NARRATIVE FOR MOBILITY 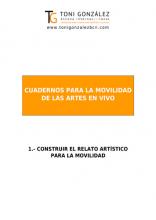 New publication by Toni Gonzalez - Escena Internacional. A practical guide to create a narrative of the artistic activity. It is necessary to present artistic projects globally to potential partners, clients or funders.

"Brand" and "Projects" in Arts Sectors

4 Pillars for the Sustainable Development of the Arts